Multiple time frame analysis is a powerful tool that enables a trader to increase the probability of winning trades and minimise risk. The concept involves observing different time frames for the same asset, identifying the overall market direction on the higher time frames and then looking for entries on the lower time frames. 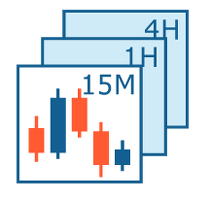 When choosing which time frames to look at, time frames too close together can sometimes be unhelpful, or even counter-productive. It is recommended that times frames should be at least four times apart.

For example, if observing a trend on a 1 hour chart, the thirty 30 chart will not provide anything useful that the 1 hour chart already does. You are likely, however, start to see clear cycles on the 15 minute chart.

In terms of counter-trend trading, take, for example, a support or resistance level that has been identified on a higher time frame, say a daily chart. It is likely that there are many more traders observing those particular key levels. Those traders include large banks and financial institutions that trade billions of dollars and generally use higher times frames.

Multiple time frame analysis works because you can identify the trends and possible reversals on the higher time frame, then find more accurate entry points on lower time frames.

Using a lower time frame to enter will reduce the risk

To illustrate this point, we will consider an example of a counter-trend trade.

Let’s say that you are looking at the 1 hour chart and have identified a resistance level where you believe the price will reverse to the downside. In order to enter into a position, you would place a stop loss on the other side of the resistance level in case the trade does not work out.

Lower time frames reduce risk because they allow you to place your stop loss at a shorter distance from your entry.

The candles on the one hour chart, however, present the price movement over each hour and the price will move further in one hour than they will in a lower time frame of fifteen minutes. This means that the candles on the 15 minute time frame will be smaller, because the price does not move as far as it would over the course of one hour.

This allows us to place a stop loss that will be a shorter distance from the entry. In this sense, the amount that you risk will be smaller and so the lower time frame actually allows you to reduce the risk. 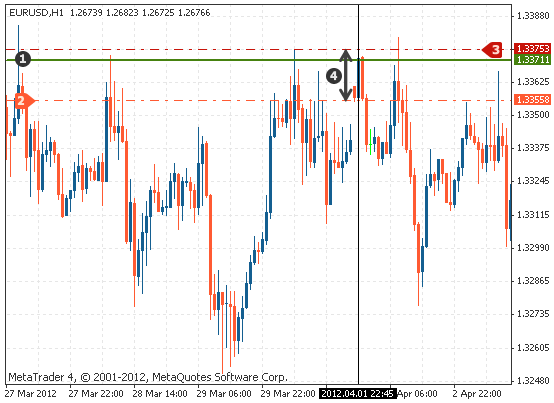 To reduce the risk you can go to a lower time frames and look at entering the short trade after the price has bounced off of the same resistance level.

Take a look at the chart below. The green line shown as 1, is the same green line shown in the 1 hour chart above — it is the same resistance level. The candles are much smaller on 15 minute chart, because the price does not move as far in fifteen minutes as it does in one hour. This means that you can enter a short position, shown as 2, with a much lower risk, as you can place your stop loss above the resistance line, shown as 3. This results in a much smaller risk of 8.9 pips, shown in the chart as 4 compared to the 19.5 pip risk on the 1 hour chart above. 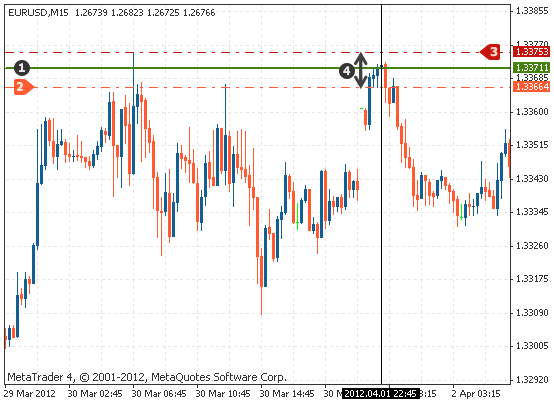 Therefore, using multiple time frames incorporates the benefits of the reliability from the higher time frame and lower risk on the lower time frame.