Cross currency (or currency crosses) is an alternative to trading major currency pairs. 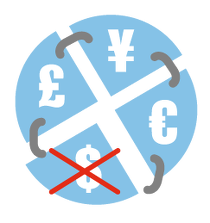 The most traded currencies are considered to be:

A cross pair is therefore considered to be when two of the major currencies above are traded, excluding the US dollar.

An exotic currency pair is considered to be when a currency pair contains one of the currency majors and one currency other than a major (usually a smaller economy or an emerging economy). An example of this is EUR/ZAR – the euro and the South African rand.

Trading cross currency pairs can produce more opportunities for traders when added to their range of trading instruments.

The US dollar was the only world reserve currency for a long time and in order to exchange from one currency into another, you had to first convert to US dollars.

Cross currencies allowed direct exchange between two currencies without involving the US dollar. However, because the US dollar is still the most widely held reserve currency, the major pairs are traded much more often and are more liquid compared to the cross pairs.

The major crosses such as the EUR/GBP and the GBP/JPY are also very liquid due to the size of the economies behind these currencies, but less so than major pairs. Exotic pairs are traded even less so and are even less liquid.

With less liquidity, the price can trend very well, because if a financial institution or a bank participates in trading a cross pair, there are less traders to potentially trade against them. So when large moves do occur, they can be in the form of a long trend and may move quite rapidly. 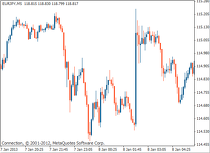 The point to bear in mind is that illiquidity can work as a double edged sword. Just as a price can move quickly in one direction, it can reverse and retrace back just as quickly. Take a look at the chart to the right. You can see that the movement on the EUR/JPY currency pair experienced a rapid volatile movement that saw a decline in price, enter into a tight range, before violently breaking back up.

Caution entering into a trend

If you are trying to enter into a trend, then you would need to bear in mind that there could be some very volatile price movement within a range before a trend emerges – there could be many small losses before making money on an eventual trend.

Also, due to the illiquidity of the cross pairs, the spread from a broker can also be higher, meaning that the cost of the trade is higher. These high transaction costs and the extra risks associated with volatility means that trading exotic crosses should be carried out with caution.

Considerations: Price can move quickly in one direction, and can reverse and retrace back just as quickly. Be careful when volatility is moving rapidly in both directions.

Economic data can provide an edge when trading cross pairs, because cross pairs can produce strong trends. Determining strong demand for one currency and weak demand for the other can enhance the probability of a trend.

If a country produces economic reports indicating that the economy is particularly strong, then the demand for that currency can be expected to rise.

Economic data can provide an edge when trading cross pairs, because cross pairs can produce strong trends. For example, if a country produces economic reports indicating that the economy is particularly strong, then the demand for that currency can be expected to rise.

On the contrary, if a country is producing weak economic figures, the currency is not expected to have such high demand.

If traders understand these principles, they will look to make money off of speculation when these reports come out. Traders can therefore determine those countries with strong economies and trade these against the countries with weak economies.

In this article, you have learned that: