Market capitalisation: the value of a company

The Basics of Stocks Trading

Market capitalisation: the value of a company

Oftentimes, certain opportunities present themselves within companies of different sizes. This lesson will introduce you to the different types of companies, the benefits and risks of each type, and how to structure your portfolio for your individual risk levels.

First of all, we will explain what market cap is and how you can determine the size of a company.

Determining how large or small a company is

The most common method of calculating the value of a company is to look at its market capitalisation – often referred to as the "market cap". 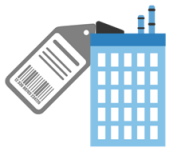 An individual share price does not tell you how much the company is worth as a whole. A company with a lower value of stock may actually be worth more than one with a higher share value, if it has more of them outstanding.

In this sense, it allows you to make a quick judgement of a company, without having to look into details such as the company's balance sheet, equity and debt value.

Companies are grouped together based on market cap 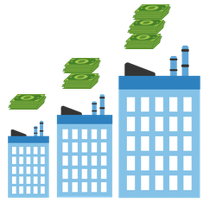 Working out the size of a company's value allows investors to group together certain companies in order to diversify their investments. The groups are divided into small-cap, medium cap and large-cap companies.

Small-cap companies usually have a market value of between $500 million to $2 billion, however, this is not set in stone.

They are usually new companies that are not followed as much or are not as widely recognised as larger companies. 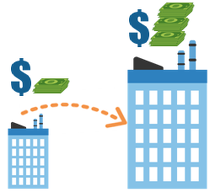 Small-cap companies can present good opportunities as their shares are usually much cheaper to buy.

With the exception of periods of economic turmoil, small-cap companies can outperform companies of a larger size due to their greater growth potential.

During periods of economic growth, traders may turn their attention to smaller companies because confidence is high and they are likely to increase their risk tolerance for greater returns.

Finding an edge with small-cap companies

With smaller companies, many investors may buy or sell shares based on a more personal approach. For example, customers of some companies may have more of an insight into how a company operates. They will usually be the first to see new products or services that the company may offer. They may even have a sixth sense of upcoming changes, just simply being involved with it.

Small-cap companies are generally associated with higher risk, because they are usually new. There is a greater chance of a small company going out of business than mid-cap or large-cap companies that have established brands.

Small-cap companies pay little in the way of consistent dividends to investors. This is because they need to reinvest profit back into the company to grow. This is not to say they do not pay dividends at all, because sometimes they may do so in order to attract new investors. However they are less likely to do so on a regular basis.

Trading small-cap shares can be more difficult because they have less liquidity than mid-cap and large-cap companies. This is due to the fact that less people trade them. This can make their share price more volatile and make it more difficult to get the desired price.

Mid-cap companies are those that have a market capitalisation of around $2 billion to $10 billion.

In some cases mid-cap companies are former large-cap companies that have seen a decrease in share value, but they still have the potential to grow.

A mid-cap company is seen as the middle of the road in terms of risk, because there is less potential that they go out of business than in the case of small-cap companies.

Once a company has reached the size of a mid-cap, they usually have access to higher levels of funding than small-cap companies, which is an advantage during times of economic hardship.

Mid-cap companies have growth opportunities through product development and customer acquisition, compared to larger companies that may have reached their limit of organic growth.

They are also more likely to pay dividends more consistently than small-cap companies.

Finding and edge with mid-cap companies

As well as having the above advantages over small-cap companies, mid-cap companies can still hold many of the benefits that smaller firms do as well.

For example, in periods of growth in the economy, mid-sized firms also do well because of their growth potential.

It is often easier to analyse the potential of medium sized companies because their balance sheets and financial statements are generally much smaller and can be easier to read than companies of a larger size. This makes it easier to determine what they are working on, in terms of new products, and what their prospects are for the future.

Mid-cap companies have more access to a decent amount of funding and so if a trader determines that a new product development could result in significant revenue increase, then this could result in a decent return for a trader looking to buy those shares. 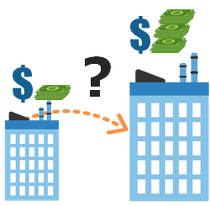 The growth prospects of mid-caps can be lower than those of small-cap companies.

There is also less liquidity trading mid-caps than large-cap stock.

Large-cap companies, also known as blue chip companies, have a market capitalisation of over $10 billion.

Large-cap companies are usually seen as the safest investment for those looking to gain a stable return, as they usually pay dividends on a more consistent basis than small or mid-cap companies.

Large-cap companies have access to greater funding and cash, which make them more secure in volatile economic circumstances. During economic downturns, you may actually see an influx of investment into these companies because of their safety.

Liquidity is higher for large-cap companies, resulting in lower volatility and a better chance of securing the price you want when you trade them.

A firm that has reached this size usually is able to invest further into developing products that already have a brand behind them. When large firms make an announcement that they have developed a new technology or a cutting-edge product, there is usually a positive response from trader and investors.

Finding an edge with large-cap companies

Finding an edge for large-cap companies is more difficult to find than small or mid-cap companies, because there is little in the way of public information that will not be available for all those that are trading it.

Those looking for an edge to determine which large-cap companies will usually analyse the company in-depth to determine if the company is undervalued or not. Sometimes this can be enough, because some traders are more willing to analyse companies more than others.

For example, large-cap companies produce very large and complicated company and earnings reports. A trader that will go through this information in-depth may determine something that shows the company is undervalued and find an opportunity.

Large companies have the least potential for significant growth, because they have usually reached a limit in their ability to acquire new customers organically.

Due to the fact that these shares are the most popular and well established, they are generally the most expensive. This means you will be less likely to purchase larger quantities of them.

There is still risk in investing in large-cap and despite historic performance, there is no guarantee that having a low risk blue chip portfolio will give consistent stable returns.

For example, banks were once seen as stable large-cap companies. However, since 2008, many banks have seen their share prices collapse, dividends suspended and their existence even threatened because of the sudden instability of the banking sector.

Diversifying your trading into different caps 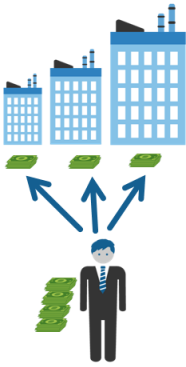 When you are looking to trade, or invest into, different shares, it is a good idea not to expose yourself to only one aspect of the market.

Many traders and investors advocate that it is a good idea to have large companies in a portfolio for consistent returns, but also hold a selection of mid and small-cap stock for growth potential and large gains.

In this lesson you have learned that: