Recency bias is an explanation of how we are affected by more recent events than events that occurred further in the past. They dictate our decision-making because of an expectation that the immediate future is likely to be the same as the events that have just occurred.

While this tends to have a minimal impact on normal daily life, this phenomenon interferes with a trader’s ability to follow a strategy – especially after experiencing a temporary performance downturn or drawdown.

Traders are likely to focus on recent losers

To illustrate, consider an example where a trader has taken 40 trades overall and the first 30 trades were all winners. After these initial 30 winning trades, the trader would feel very positive and confident, and would have no hesitation taking more trades. If, however, the following 10 trades all lose, then these will have a greater impact on the trader’s mindset and may cause the trader to lose confidence, because they were the most recent set of events to occur.

Recency bias interferes with a trader's ability to follow a strategy or trading plan after experiencing a temporary performance downturn. The emotional impact from recent losing trades can be very high, even if the trader's strategy statistically produces more winning than losing trades.

The emotional impact on the trader from the losing trades is much more potent, because they are more recent, despite the fact that the system has produced 30 winning trades out of 40. The trader’s mind is using only the most recent data to form an emotional state.

This continues to influence the trader in two ways: Firstly, this negative state of mind leaves the trader vulnerable to mistakes and secondly, the trader may question the strategy itself.

This can lead to two common symptoms of switching and fear of taking trades.

Switching is the continuous changing between trading strategies, without an actual basis for doing so. This usually happens after either experiencing a sequence of losing trades or when the account goes into negative equity.

Switching is the continuous changing between trading strategies, without an actual basis for doing so. This usually happens after either experiencing a sequence of losing trades or when the account goes into negative equity.

In the trader’s mindset, they are successfully avoiding losing streaks because they stop trading the strategy once it becomes unprofitable. In reality, the profitable periods of the system are never experienced because each system is never fully traded through the drawdown period and back into profit; only the losing streaks end up impacting the trading account.

If the strategy has been tested and there is evidence that it is a winning strategy, then the correct course of action would be to trade through the drawdown period. However, the poor trading results are the most recent event to occur and so instead of following a logical plan, they try to avoid losing trades and in doing so, switch from a winning system.

Fear of the next trade 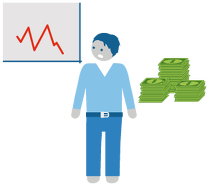 Another common symptom resulting from recency bias is a fear of taking further losses. The fear instilled from the recent losing trades influence the trader to the extent that they find it difficult to pull the trigger and execute the next trade.

The trader then tries to pick winning trades based on gut instinct or emotional judgement and veers away from trading in accordance to the rules of the strategy. They 'feel' that the trade will not work out and so they do not take that trade. More often than not, this results in winning trades being missed and so the trading account never has a chance to recover from the drawdown.

The correct course of action is to trade through the drawdown periods and back into profitability. However recency bias is hindering the trader’s ability to execute individual trades according to the system.

Get into a logical state of mind using a trading journal

Recency bias results in the trader making decisions based on emotion and not on logic.
Once the mind is in an emotional state, it is difficult to switch the mindset back to a logical state.

The use of a trading journal can help get the mind thinking in a logical way because a trading journal presents facts and data. Assuming that a trader always records their trading activity, when a trader is looking at the results of past trades, they are taking in information that is derived from facts and not emotion.

This data cannot be disputed, and reading over previous results that show a system is profitable, will bring the mindset back into a logical state.

To overcome recency bias, use a trading journal to record past trades in order to review the facts and dispel emotion.

This counteracts the effects of recency bias because the recent losing trades are no longer the dominant factor influencing the trader. In our example, the results of the 30 winning trades would be more influential than the most recent 10 losing trades, because the trader is observing the system as a whole.

This reduces the likelihood that a trader will succumb to switching or fear of taking the next trade, because the results will show that statistically if they keep trading, they will end up with a profit.

show less
next lesson
Understanding recency bias
Psychology Patterns
Enrol into this course now to save your progress, test your knowledge and get uninterrupted, full access.