Warped expectations are unrealistic expectations of the rewards you can get from trading. For example, making an excessive amount of money with a small trading account or even learning a few basic concepts and then believing you can be a winning trader after just a few days of studying.

These expectations can be fuelled by stories of how much money some traders have made in the market, or how a particular system has produced an unrealistic amount in a short space of time.

This can result in an emotional attachment to potential wealth, and the opportunities that the money they make can bring, such as a luxurious lifestyle or extravagant purchases.

Warped expectations are an emotional burden that can impede a trader’s ability to make objective decisions and stick to the rules of a system.

The purpose of trading then becomes geared around this fixation. A trader may place a trade with the thought of what they can buy with the money, instead of concentrating on the analysis of the trade itself.

How does this affect decision making? 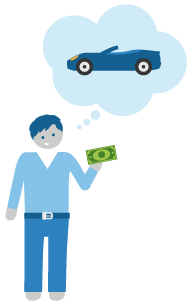 In order to illustrate this point, let’s say a trader places a trade and while doing so, they are thinking of something that they want to buy with the money they make. The trade is an emotional trade because it is object driven – it represents the trader having something they do not currently have, but want.

In the scenario of a winning trade, there will be a point where the trade is in profit, but the trade is not complete. If the trade then begins to turn against the trader due to simple market fluctuations, the trader may panic because they are watching equity disappear. However, instead of leaving the trade to either reach the profit target or stop loss, they begin to question whether they should keep the trade open or not.

If that trade goes on to hit the profit target, the trader has effectively closed down a winning trade and reduced the profit on it under the influence of this emotional attachment. This is the biggest issue, because holding onto winning trades and letting them run into a profit target is often the difference between successful trader and an unsuccessful one.

If a trader is thinking of something they want to buy with the money they make while placing a trade, they pick up an emotional attachment to the trade. Therefore, they may not follow the rules of his strategy in an attempt to make the money he needs for the item he wants.

Traders may risk too much to get what they want

Another scenario that is likely to present itself, is the trader wanting to reach a certain level of capital in a short space of time. Instead of risking an appropriate amount of 1 to 2%, they risk much more.

Inevitably, the trader will have losing trades, which means that they will at some stage lose a large portion of their account with excessive risk. When this happens, the emotion that the trader feels is more intense because their material goals are now further from reach.

The trader may carry on risking the same amount to try and gain the money back and become stuck in a downward spiral. The more the trader loses large amounts of money, the more intense the emotional influence and the more the emotion has an effect on their trading decisions.

The brain sees what it wants to see

Warped expectations may also mean that a trader does not look at their charts as objectively as they would usually when their mind is free of emotion. When a trader is emotionally influenced, they may not see something on their chart that is telling them to stay out of the trade.

Another very common scenario is when a trader looks back over historical data and they see great setups. Convinced that they now have a winning system that can produce great results, they start to think about the returns they can get if they trade these setups live. They continue to look back over historical data and keep seeing scenarios of winning trades. Under this emotionally charged analysis, they fail to see all of the times that trades do not work out.

You may look over historical data on a chart and see great setups leading to you believing that you have a winning strategy. But emotions are influencing you and causing you to overlook the times that trades do not work out.

Inevitably they start trading live based on this analysis, without fully testing this new strategy and end up losing capital over a series of trades.

Ridding the mind of warped expectations

Trading under the influence of warped expectations therefore inhibits the trader making money with a profitable strategy. A different approach is needed and this starts with a realistic expectation of what a trader can achieve.

This starts with accepting that some trades will result in a loss.

Trading is comprised of a market that has many participants. At any time, a large institution or bank can enter the market and move the market price due to the sheer size of their orders. The markets therefore will not always behave as expected because it will never be known when these participants will enter into the market.

This means accepting the fact that you will inevitably have losing trades. The scenario of a trader closing down a trade prematurely is a result of that trader not accepting the risk on the trade.

Remember: The markets will not always behave as expected. Therefore, you must accept the fact that a trading system will encounter losing trades.

If the trader accepted the risk, then it would not have mattered to the trader if that trade had won or lost — the trade would have been the result of a purely objective decision and subsequently allowed to hit the profit target.

The further you are from emotional attachment, the easier it is to make objective decisions and change the way you trade. You will find that as you experience losing trades with a demo account, or a very small risk to a live account, unrealistic expectations fade – you can see what you can get in a realistic trading scenario.

Trading with a demo account or with very low risk will enable you to reduce the emotional effects of losing and will help you to align your expectations with realistic results.

Test your system to see if your analysis was correct

Another powerful way of aligning yourself with realistic expectations, is to thoroughly test your strategy and continue to monitor it.

When you test a strategy and record your results, then you will be able pick up on anything that you would have missed when you were first looking back over historical data. The results of your testing will allow you to understand how realistic your returns can be and align your expectations.

So far, you have learned: