An introduction to psychology in trading

Learn to Manage Your Emotions

GET PREMIUM NOW
next lesson
Understanding psychology in trading

An introduction to psychology in trading

The role of psychology in trading

Successful trading is not down to any single trade, but a number of trades using a strategy. This means that a trader must be disciplined enough to stick to their strategy, even throughout a losing streak. However, human beings often do not behave in a logical way and there are many times that emotions influence us and we act differently to normal.

Do you remember the last time you were very angry? Maybe you did something and you were surprised by your actions. As much as you regretted it afterwards, at the time you probably couldn't help it and furthermore, you are likely to act the same way again if you become angry in the future.

This is because the psychology of a person is made up of thoughts and feelings that are an incitement to act, and so psychology shapes our behaviour in every aspect of our lives – trading is no exception.

A trading strategy's success is determined by a number of trades. A successful trader must stick to the rules of their strategy and not allow emotions to get in the way.

Emotions are inevitable – especially for a new or unskilled trader and they can prevent you from making an objective decision. For this reason, learning how to control emotion becomes paramount to successful trading over and above everything else.

When a trader is thinking clearly and uninfluenced by emotion, he is said to be in the zone. When you are in the zone, you are in control of your behaviour and are able to follow a trading strategy in a logical and systematic way.

Some traders find it easy to get into the zone, but even those who struggle can learn to control their behaviour and become emotionally detached from trading.

When a trader is thinking clearly and is uninfluenced by emotion, they are said to be in the zone.

Tharp's chart and the importance of psychology

Dr. Van Tharp is known for breaking down the trading process into three categories that affect traders. He categorises them by importance as follows: 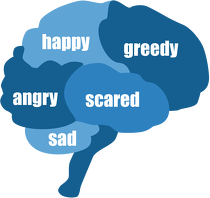 According to Dr. Tharp, the psychological outlook and an individual’s way of thinking towards trading is the most important factor for success.

The fact that the actual trading strategy is ranked the least important by Dr. Tharp, suggests that regardless of how successful a strategy is, psychology is the key to being successful.

The emotions in trading that have a negative impact on results are greed and fear. These emotions cause a trader to deviate away from their plan, which can lead to further issues, such as ego and revenge trading.

The following are examples of these emotions and how they can negatively affect trading results.

Fear of losing can lead to further losses

When a trader has a fear of losing, they try to avoid them. This can actually increase losses.

For example, a trader may open a trade and place their stop loss, say, 20 pips away – based on the strategy they use. In other words, there is a technical or fundamental reason for it being placed where it is.

Fear of taking losses can ultimately lead to even more losses. The typical behaviour of a trader will be to close trades early, either when the trade has temporarily gone into a loss or a small win, and not letting the trade run its full course

Another scenario is when a trader closes their trade as soon as it has gone into profit, out of fear that they can lose that profit. If the trade then goes on to hit the profit target, then the trader has reduced a full winning trade down to a much smaller win.

This behaviour ultimately turns a profitable strategy into a losing one, because the trader reduces the amount of winning trades and/or reduces the profit overall because of fear of losing.

Greed results in trying to take too much profit and end up with less.

When a trader experiences greed, it means that they try to go for too much profit and deviate from their strategy. For example, a trader may place their profit target in accordance with their strategy. This means that – as with placing a stop loss – there is a technical or fundamental reason for doing so.

A trader under the influence of greed will try to go for more profit and will not close their trade when their strategy dictates that they should.

However, when greed influences a trader, they do not close their trade when the strategy has dictated they should – they try and go for more. What can happen is that the trade can turn against them, ultimately ending up with less profit, or worse, a losing trade. This means that they actually reduce the profitability of a strategy because they try to increase their profit through greed.

A trader influenced by ego will never admit they are wrong

A trader under the influence of ego does not want to admit they are wrong.

For example, if the trade does not go well, instead of closing their trade according to the strategy, they carry on taking a bigger loss than necessary because they cannot admit that they are wrong.

Another scenario may be that after taking a loss on a perfectly good trade, they do not go on to look for the next setup according to their strategy. Instead, they continue taking trades based on their original analysis because they believe they were right in the first place.

Ego can affect a trader, causing them to not close trades when their strategy dictates they should or continues to trade on the same analysis after their trade has been stopped out, because they believe they are correct in their original assessment.

Revenge trading is when a trader chases the losses they have made – they are so focused on winning the money back that they fail to realise that they are not trading with a set of rules and each trade ends up resulting in another loss.

The importance of discipline when trading

To avoid emotionally influenced trading, you will need to build discipline that will allow you to think as objectively as possible. There are several ways in which you can do this:

Trade with a tried and tested strategy

You are much more likely to remain calm under pressure if you have confidence in your trading plan. If a strategy has not been tested enough, it may lead to doubts that could allow fear to overwhelm the trader.

Testing and further development of a strategy should be done on a demo account first before using real money. Using real money creates an additional pressure that is likely to amplify negative emotions that are involved when trading, which can lead to further losses.

Having confidence in your plan will help keep you calm under pressure. Test your strategy with a demo account and accept the risk, because a 100% winning ratio is unrealistic.

A strategy with a 100% winning ratio is unrealistic. You must be prepared to accept losses. It is normal to hope that every trade turns out to be favourable. However, inexperienced traders are likely to experience a stronger emotional impact when they take a loss. In contrast, a profitable trader is able to accept losses as part of the trading strategy and move on to the next trade, without allowing greed or fear to affect future decisions.

show less
next lesson
Understanding psychology in trading
Learn to Manage Your Emotions
Enrol into this course now to save your progress, test your knowledge and get uninterrupted, full access.