Evaluate the Status Quo and Outlook

As we mentioned in the lesson “Fundamental analysis” interest rates have a high impact on the value of a currency. For this it is worth to have a look at the connection between interest rates and monetary policy. In the following chart you can see the Central Bank Base Interest Rate of China: 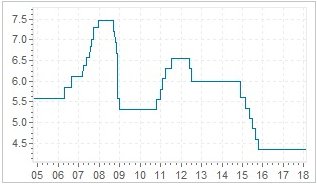 Seeing a decrease in the interest rate for China is no surprise since all industrial countries have decreased their interest rates over the last 10 years. They did this to grow their economies after the worldwide recession of 2008.

In the following chart you can see the development of the GDP in China: 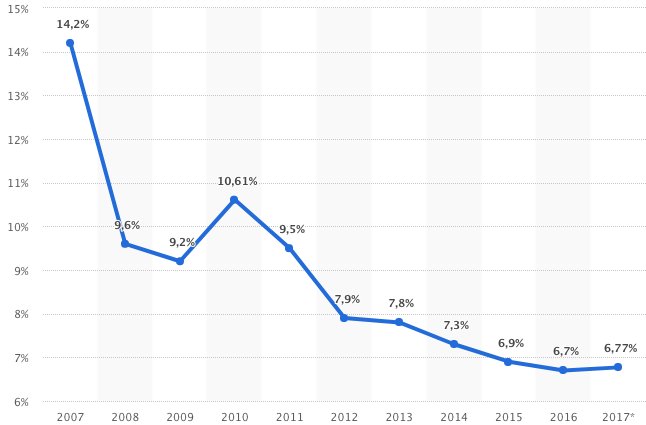 You can clearly see the economic drop in China, for this reason it should be clear to have a lower interest rate during this time to push the economy with a more attractive interest rate. This also meant that the value of the currency dropped or in other words, the Yuan became cheaper. So since nothing else has changed there was a devaluation of Yuan against other currencies.So what can you expect when the Chinese economy grows again? When the economy starts growing again then the PBC will most likely increase the interest rates. This will lead to a more expensive Yuan leading to a falling USDCNY. This is just a theory. In the real world, the price of USDCNY is depended on many things. China has no interest in a strong Yuan because that will makes Chinese products more expensive leading to a smaller number of exports.

China holds $3.3 trillion in reserve, the biggest in the world. Japan holds the second largest USD reserve, $1.2 trillion. Asian countries hold big foreign exchange reserves as they have a strong export orientation. China exports 40% of the goods it produces and at the same time it has an immensely high savings rate of 35%.

show less
previous lesson
Trading the Yuan (Renminbi)
next lesson
Trump and his protective policy "America First"
General trading basics
Trading the Yuan
Evaluate the Status Quo and Outlook
Enrol into this course now to save your progress, test your knowledge and get uninterrupted, full access.