As a forex trader, it is important to understand the relationship between currency pairs, because currency correlation can affect the exposure and risk to your trading account.

Currency pairs are made up of two separate currencies and they are valued in relation to each other. Each currency belongs to an economy that can affect the supply and demand of it. If the value of one currency increases (or decreases), it increases (or decreases) across the board against all other currencies, not just a single one. For example, if the euro increases in value against the US dollar, it is likely to increase in value against all other currency pairs as well, not just the US dollar. This means that currency pairs cannot be traded in isolation.

Currency correlation is when the price of two or more currency pairs move in conjunction. It can affect the exposure and risk to your account when trading more than one pair at a time.

Positive correlation means that two currency pairs move in the same direction – if one currency pair moves up, so does the other. To illustrate this, let's take the example of the EUR/USD and the AUD/USD.

If the EUR/USD increases because the USD has become weaker, you can expect that the AUD/USD will also increase. This is an example of a positive correlation between the EUR/USD and AUD/USD.

Negative correlation means that two currencies move in the opposite direction to each other – if one currency pair moves up, the other moves down. To illustrate this, let's use another example, this time of the EUR/USD and USD/JPY.

Trading more than one pair at a time

Due to correlation between different currency pairs, there are considerations that you have to take into account when trading more than one currency pair.

Currency correlation can increase the overall risk to your trading account 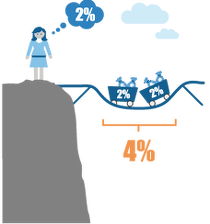 Let’s say that you risk 2% of a trading account on a single trade. If you open a long position on both the EUR/USD and the GBP/USD, then it would appear that you have opened up two trades with a 2% risk on each.

Correlating trades can cancel each other out

If a trader opens up a long position on the EURUSD and a short position on the GBP/USD, then because they are likely to move in the same direction, one will produce a profit and the other will produce a loss. Any profit made on one trade would be offset by the loss on the other. Opening up opposite positions on a strongly correlated currency pair is counter-productive.

Similarly, if a trader opens the same position on a negatively correlating pair, such as the EURUSD and the USD/JPY, then if one position results in a profit, the other will result in a loss. Any profit gained on one trade is likely to be offset from the loss on the other.

Correlations can be measured

The correlation between currency pairs is not exact. Depending on the fundamentals behind them, a currency correlation can become stronger or weaker – they can also break down completely. The financial industry generally measures correlations using a scale from +1 to -1:

Using currency correlation to your advantage

Currency correlation can hold advantages when trading, because observing one currency pair can give you an insight into another, if they are correlated.
Confirming trades and analysis

Correlation can be used to confirm a trade, or your analysis, on a particular currency pair. Correlation is never exact and so you are looking for the same ‘kinds’ of moves, but they will not be exactly the same for each currency pair.

To use currency correlation to your advantage, you can look at the set up on one particular currency pair and notice the same type move with other, correlating, currency pairs, this may make you feel more comfortable about taking the trade on your initial set up.

To illustrate, let's say that you are observing the EUR/USD pair. You observe that the price is moving down and you are considering whether to enter a short trade. You can use positively correlating currency pairs, such as the AUD/USD and GBP/USD, to see if there is a similar down trend occurring.

If there is, that means that the move is most likely due to a fundamental factor, making it more likely that a trend will be established. This may make you feel more confident about the trade on the EUR/USD.

The chart below shows an example of all three currency pairs moving in the same direction, making it more likely that a short trade will work out.

Correlation can also be used to keep you out of bad trades, such as a false breakout.

If you are observing a currency pair that has been in a range and you observe a breakout to the upside, you can use positively correlating pairs to see if they have also broken to the upside.

Let's look at another example using the EUR/USD, AUD/USD and the GBP/USD. In the following chart you can see that the EUR/USD had been trading in a range and broke to the upside, marked by 1:

You can see that even though there is a breakout on the EUR/USD, there is no confirming movement on the AUD/USD or the GBP/USD. You can also see that after a very short time, the EUR/USD then fell. By using currency correlation, you can avoid bad trades.