Traders will look for possible reasons why the demand for a share may increase, in order to buy at one price and sell at a higher price. If a trader believes that the demand may fall, then they can actually sell that share without owning it through a mechanism called short-selling.

To do this, they can use a vast array of information. One way is to analyse a company to see how it is performing. If the company is performing well, then demand for its shares is likely to go up. For their analysis, traders use the reports a company will publish, including their earnings report.

Every trader needs a trading journal. As a Tradimo user, you qualify for the $30 discount on the  Edgewonk trading journal. Simply use the code " tradimo" during the checkout process to get  $30 off.  Use this link to get the discount.

How to read earnings reports

Any public company releases financial statements that contain a lot of information. However, you only need a few key figures from these reports.

An earnings report is the most commonly known and used report to determine the demand for a company's shares.

Earning reports are released every quarter, six months or every year, depending on the company. If the report is positive, the demand for its shares is likely to go up.

They are released every quarter, 6 months or once a year, depending on the company. It tells the investor how a company has performed over that given period.

An earnings report is broken down into three main categories: earnings per share, revenue and net income.

The EPS of a company is the profits of the company allocated to each share. It is usually seen as the most important figure within the earnings report.

If the company pays dividends, the company will allocate a proportion of its profit (after it has already paid tax on it) to its shareholders. This amount is subtracted from the company's income and then divided by the number of shares that the company has issued.

The EPS is seen as a good overall picture of performance and is the most significant aspect of the earnings report.

Although a trader will seldom base a decision to buy shares on this figure alone, generally, the higher the earnings per share, the better. It can also be used to compare against other companies to see which one may be more desirable. 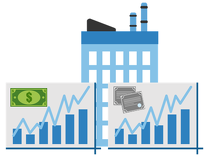 This is the amount of money that the company generates. It includes both normal income by providing its usual services, as well as investments.

The revenue is the gross amount before any costs or expenses are taken out.

If the revenue increases from one quarter to the next, then this means the company has either optimised its existing revenue streams and/or found new ones. This will usually make the shares more desirable because the company is likely to be growing. 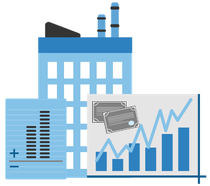 The net income of a company is the total amount of profit that has been made after all the costs and expenses have been taken into consideration.

The net income is important, because if a company is making a profit, it is more likely to grow and traders will be more confident in buying its shares.

If a company makes a loss, then this can reduce demand for its shares.

However you should note that it can be the case that a loss may not be detrimental to the share price, because it depends on why the loss occurred. If a loss was from a major purchase or investment, then this could even be more favoured by traders if they believe the investment will increase the profits of the company in the future. 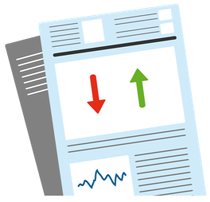 When trying to determine if the price of a share will rise or fall based on an earnings report, it can be difficult to know what to expect because of such a diverse range of opinions – each trader has their own perspective.

A useful way to use an earnings report is to look at what is known as consensus estimations – a collection of opinions made by a number of analysts. An estimated consensus figure is an average of what these experts are predicting. You can usually find consensus reports with any financial website or broker website.

Once there is an expectation, then traders can use this to decide if the company's shares are worth trading ahead of the release. At the time the report is released, traders can compare the results with the estimations of analysts. If the results are better than expected, then usually the demand for those shares will increase.

Use other information to gain a rounded outlook

There are other reports that a trader can look at to see if the value of a company's share price may increase.

When a company reports their earnings, they will usually indicate what they expect to earn in the coming period.

If a company lowers its estimate, then its shares are not going to look as attractive. Similarly if the company raises its expectations, then traders are likely to buy its shares.

When two companies merge or a company purchases another, this can impact the share price of both companies.

If a company is about to merge with or acquire another company, the share price can potentially go up for both companies if it is seen in their best interests. Sometimes the share price of the company making the purchase may temporarily go down due to the costs involved in the purchase.

Usually, when the company that buying the other company announces the acquisition, they will see a negative effect on its share price, because of the costs involved making such a big purchase.

After the initial period of the announcement, the share price of the company may rise again if the company they are buying is seen as contributing to the company's growth.

For the company that is being bought, you would usually see an increase in their share price. This is in anticipation of a premium having to be paid for the stock to ensure that shareholders accept a bid.

When a company offers a dividend to shareholders, it is in essence offering them a proportion of the profits that the company has made. If a company increases the dividend payment to its shareholders, generally this is seen as positive because it makes the stock attractive to potential investors seeking a consistent return.

In this lesson you have learned that ...