What are the best times to trade Forex?

The Basics of Forex Trading

What are the best times to trade Forex?

A significant advantage in forex trading is the ability to trade for twenty four hours each day throughout the week. However, the trading day consists of multiple trading sessions: the European session, American session and the Asian session – also known as the London, New York and Tokyo or Sydney sessions. This is because there is no single exchange in the forex market and different countries trade at different times.

Each of these trading sessions are driven by the economies that are active and so each session has unique characteristics to them. There isn't necessarily a "best" time to trade forex.

When certain countries are open for business, that country’s currency and the currency of their trading partners are likely to be traded in greater volume.

Therefore, whichever session is open, the countries that are trading at the time will directly correlate with the currencies being traded. This means that each trading session will be slightly different in terms of the activity of certain currency pairs, the market volume and volatility.

Strictly speaking, there are no open sessions on the weekend. Trading starts when the Sydney session opens at the beginning of the week and finishes when the New York session closes at the end of the week. However, your location in the world will depend on what time and day this is. If you are trading in Japan, the trading week starts on Monday morning. However, if you are in the UK, this will actually be on Sunday evening.

The following table shows the trading sessions throughout the world according to GMT. You can see from the table, that the trading day starts with the Asian session (Sydney) at 22:00 GMT and closes at the New York session at the same time – 22:00 GMT.

We have shown you the trading sessions in the table above in GMT, because GMT never changes and so you can use it in whatever time zone you are currently in. However, you will need to adjust it to the time zone you are in. For example, if you are in Central Europe, then for the winter time you will use GMT +1 hour. When the times change in the summer, you will use GMT +2 hours.

Get a deeper insight into the world of trading and see trade ideas that we implement on our real money account. Try our Premium service for just $1 for the first month with no further obligations.  Go Premium now and use a  tradimo1 voucher code at a checkout page.

Characteristics of each trading session

The following outlines the different characteristics of each trading session. 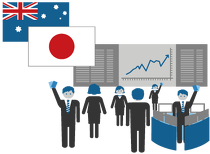 The Asian session starts at 22:00 GMT when Sydney opens. Since only Sydney is trading at this time, the volumes that are traded are relatively small and therefore the price changes are likely to be minimal compared to other sessions.

At 00:00 GMT, Tokyo opens and the trading volume increases. Australia and Japan are relatively small markets compared to Europe and the US and the price changes are still relatively moderate. Spreads on major pairs are likely to be slightly higher during these times and the liquidity will not be as high as they are in the European and US session.

During the Asian session, the Australian dollar, the New Zealand dollar and the Japanese yen are traded the most, because these are the domestic currencies of the major markets that are open at that time. The most traded currency pairs that are traded during this session are the AUD/USD, AUDJPY, AUD/NZD, JPY/USD, NZD/JPY and NZD/USD.

At 8:00 GMT the London session opens and Tokyo is in the last hour of trading.

During the European session there are no currency pairs that behave differently from normal, so in general, all pairs can be traded. There is also substantially higher volume in these sessions and so the spreads tend to be smaller.

There is also more liquidity in the London session than any other session as the London market accounts for almost 38% of the total volume – more than New York (17%) and Japan (6%) put together. Trading when the London session is open is a good start to ensure that you are trading in a highly liquid market.

At 17:00 GMT, the London session draws to a close and then New York trades by itself until the Asian session opens again.

At that time, only New York is open and although the trading volume is still higher than during the Asian session, the volume is likely to decrease with the exit of the European traders.

During the American session there are no particular currency pairs that should or should not be traded.

The darker circles in the tables above show where there is an overlap in trading sessions. Tokyo and London share an hour when the Asian session closes and London opens. London and New York also share four hours of trading from GMT 12:00 to GMT 17:00.

The significance of these overlaps is that there are considerably more traders trading at the same time, which affects the conditions of the market. When there are more active traders, there will be more liquidity in the market. Higher liquidity means that slippage is less likely, orders are more likely to be filled and the spreads on currency pairs are reduced. These tend to be good times to trade. 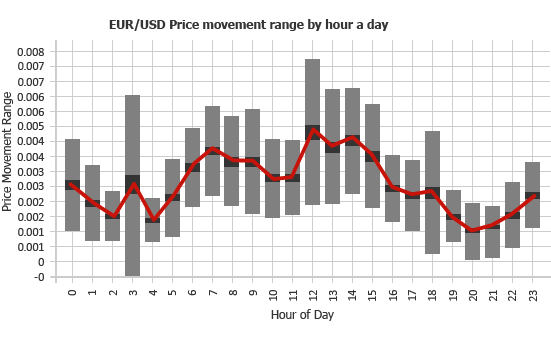 Caution is also warranted when the trading week starts with the Asian session and when it ends with the New York session – at these particular times, the market volume is very low.

There are also national holidays that will change forex market conditions, such as a UK or US bank holiday, because without these countries participating, the market volume and liquidity will be a lower than usual.

At certain times during the day, news and reports are released that have an impact on the forex market. At these times, the impact can be dramatic, causing the price to move rapidly in a single direction and re-trace just as quickly. This is due to low volume because banks and institutions are taking their positions out of the market, and so quick and rapid price movements in both directions can be observed.

The publishing times of these reports are available ahead of time and so volatile conditions can be avoided.

In this article you have learned that ...