Scaling in and out of trades

Money Management to Enhance Your Performance

Scaling in and out of trades

Scaling is a method of trade management that allows you to reduce potential losses and maximise potential profits, despite the fact that the future price movement in the market is unknown. There are two types of scaling: scaling in and scaling out.

Scaling into a trade means that when you enter the market, you initially enter just a fraction of the total position that you intend to trade and then observe how this initial market entry develops. If the trade works out as intended, then you can enter further positions in the market and take advantage of the price moving in your favour.

The following chart demonstrates an example of multiple entries as the uptrend develops.

The benefits of scaling in

Let’s say that you wished to enter into the above trade with a standard lot. The trade will either win or lose, however by entering just a fraction of the standard lot, you reduce the total risk.

By breaking down this position into mini lots and only initially risking, say, 5 mini lots (half a standard lot) on the first entry, you will lose much less if the trade does not work out compared to if you entered with a full standard lot.

Scaling in can be beneficial because you can add to your position as the trade goes in your favour, but if it turns against you immediately, you only lose a small amount of your capital.

Without scaling into the trade, you would enter the market with your entire position (in this case a full lot) which means that more would rest on your judgement of the trade being correct.

You can also add more than just the intended amount. Let’s say that the trade is successful and the initial position that you entered is now in profit. If you bring your stop loss up to the initial entry point, then you have taken any risk you had out of the market. This means that you can continue to increase the position size and keep adding to the winning trade beyond the amount that you initially intended to enter.

The risks of scaling in

The most prominent risk of scaling into a trade is that it can increase the overall exposure of your account, which is why it is essential to apply appropriate money management, that means only risking 1-2% of your trading capital on a single trade.

The risk of scaling out is that if the trade reverses against you, the more positions you have open, the more you can potentially lose. Always apply sound money management when scaling out.

Even if the market is trending in your favour, there is always a danger of the trade reversing against you and the more positions you have open, the more you can potentially lose.

Also, as you enter positions while the trend develops, the later positions that you enter with may be closer to the end of the trend. It is advisable to be cautious when you are getting into a trend that has already been established for a while, as demonstrated in the chart below. 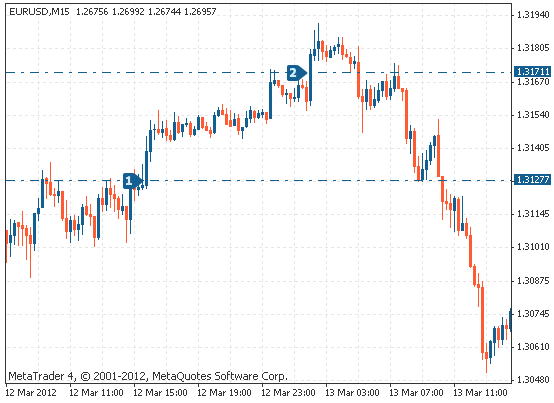 Scaling out of trades 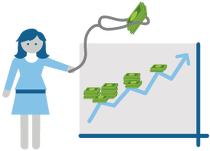 Scaling out is a similar concept. Let’s say that you have a total position of one standard lot in the market, and the trade is in profit. You may have reached your initial profit target, but it seems like the market could continue to go in your direction. In this instance, you can close some positions to take profit and leave some positions open in order to take advantage of potential further price movement . By doing this, you maximise your gains by locking in the profit you have, while still having a position to take advantage of further price runs. You can see an example of this in the chart below. 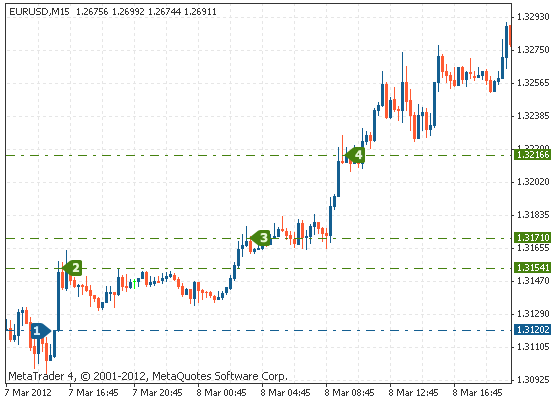 The chart above shows a winning trade was scaled out as part of the position was taken off at each stage of the upward move. The first exit was taken out of the market once the initial move upward had finished, leaving two further positions to take advantage of the continued upward trend.

This technique reduces your overall profit, because, of course, you would have made more if you had left the entire position open for the duration of the entire upward move. However, scaling out protects the profit you have. For scaling out to work well, the market needs to be trending.