Building on the Forex Beginner Strategy

The forex beginner strategy teaches you the basics of reading charts and gets you used to entering trades – it is an entry point into forex trading. You learn by doing and for this reason we have told you what to do, but not why you should do it.

For example, we make use of fractals to make decisions, but we do not tell you why we use fractals or what they really are. In this lesson we explain the principles and the idea behind the forex beginner strategy to give you a broader understanding of how the beginner strategy works

Fractals are an indicator and they signal that the market direction could reverse.

When a fractal appears on your chart, it is telling you that a particular type of price action has happened in the market and that a reversal is likely.

When an up fractal forms, it is because the following has happened:

The following chart shows this price action on a chart: 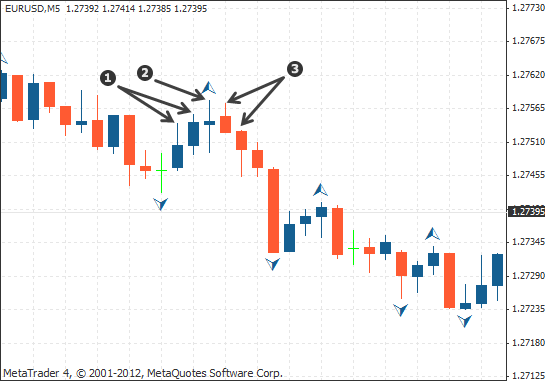 This pattern is common in the markets and when this happens, your trading software puts a fractal above the highest high.

The buyers in this case have attempted to push the price to a higher level no less than five times, however the selling pressure was too great, in which case this signals that the sellers are in control and so it is likely that the price will reverse to the downside.

When a down fractal forms, this is the other way around:

The following chart shows this price action on a chart: 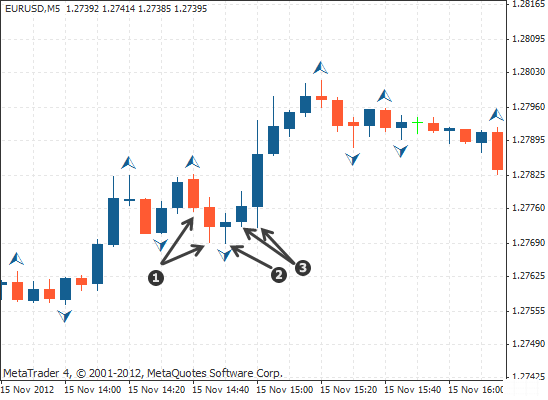 The sellers in this case have attempted to push the price to a lower level no less than five times, however the buying pressure was too great, in which case this signals that the buyers are in control and so it is likely that the price will reverse to the upside. When this happens, your trading software puts a fractal below the lowest low.

Trading platforms can jump the gun

Why do we wait for the price to break the fractal?

Using the example of a down fractal, when it is printed, this means that a reversal could happen. That is, the sellers have attempted to push the price down, but the buying pressure was too strong.

Because of this, there are many traders that open buy positions in the market. This is logical, because the price behaviour has shown that a reversal to the upside is likely. Those traders that are opening buy positions are likely to be placing stop losses on various levels below the fractals and the lows of the candles.

When you buy, your stop loss is actually a sell order – it closes your position by selling the asset that you bought. 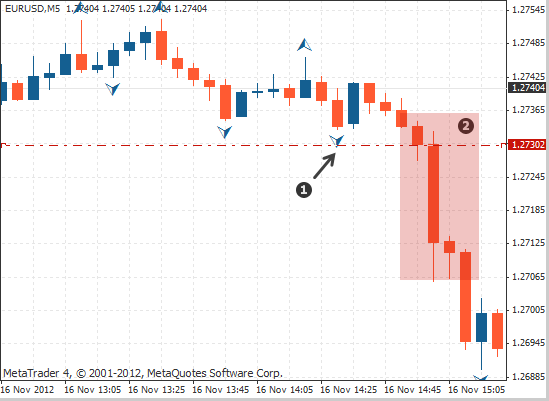 Pivot points are price levels that have been calculated from price action that happened the day before. They are used by many traders, including banks and financial institutions to enter and exit the forex markets.

For this reason, it is said that this price level – the main pivot or daily pivot – is the point at which the market “pivots” around, which is just another way of saying “centred” around. This is where the name pivot point comes from and so you can think of the daily pivot as the centre point of the market.

The following chart shows the pivot points on a price chart: 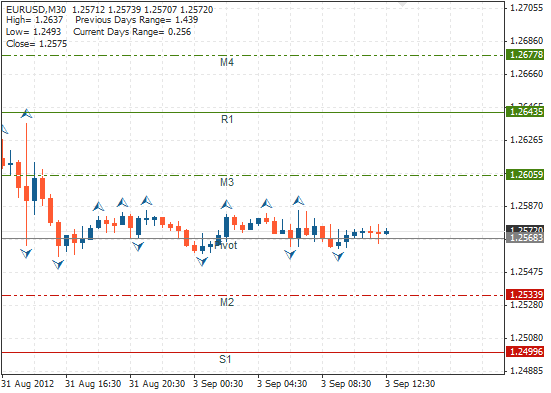 Buyers and sellers use pivot points to enter

The following chart demonstrates how in an up trend, the price reacts around the pivot point levels, because traders are selling or closing their buy positions. The green shaded areas in the chart show the point at which the price meets the pivot levels.

If you know that the majority of traders are using pivot points to make trading decisions, that is, where they are buying and selling, then price is more likely to react around these price levels. Understanding this means that you know two things:

For this reason, they make very good profit targets.

The forex beginner strategy uses the principle of multiple time frame analysis because of the benefits in reducing the risk as well as maximising the probability of the trade working out.

This means that you can observe the general direction over the last few hours and then trade in that direction.

Of course it is not easy to always decide which way the market is trending, which is why we make use of the fractals that give a clearer indication when the price breaks through them.

The following two charts show the same time and price action on the 30 minute chart and the 5 minute chart. The green shaded area highlights the exact point in time that we are observing. On the thirty minute time frame, you can observe that the trend is up. This is further confirmed by an up fractal, shown at 1, being broken, shown at 2. 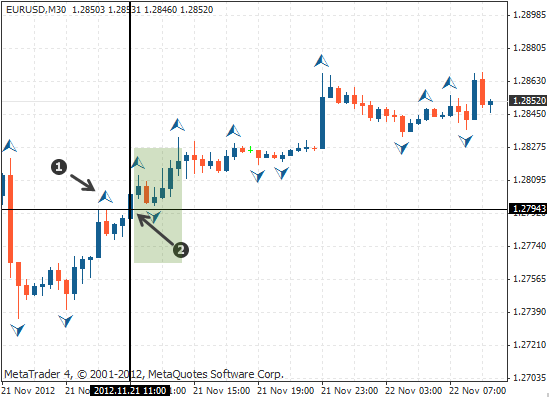 This means that if we now take long trades, we are trading in the direction of the trend and so the trades we take have a better chance of working. We can then go to the lower time frame and find more precise entries.

The following chart shows the same period in time on the five minute chart. Following the beginner strategy principles, we now look for a broken down fractal, shown as 1, followed by a broken up fractal 2, at which point we enter. 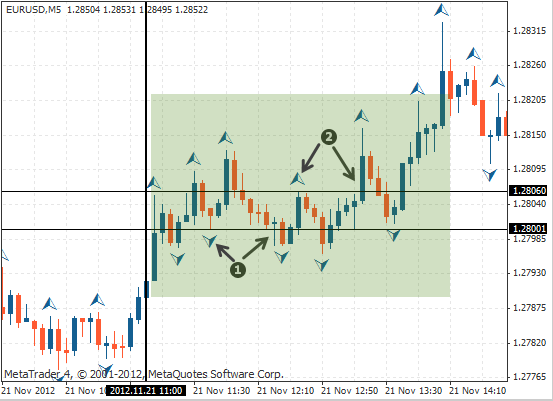 This means that now you can trade in the same direction as the overall trend and maximise the potential for winning trades.

When you switch to the five minute time frame, the time period along the bottom stretches over a much smaller time period than it would on the thirty minutes.

The following two charts demonstrate this. The green shaded area is again the same price action and point in time on both the 30 minute chart and the 5 minute chart. On the 30 minutes chart, if you would have entered using the break of the an up fractal, shown as 1, then the stop loss would be placed at the tip of the last down fractal, shown as 2. As you can see, this is a considerable distance between the entry at 1 and the stop loss at 2, shown by 3 – over 65 pips. 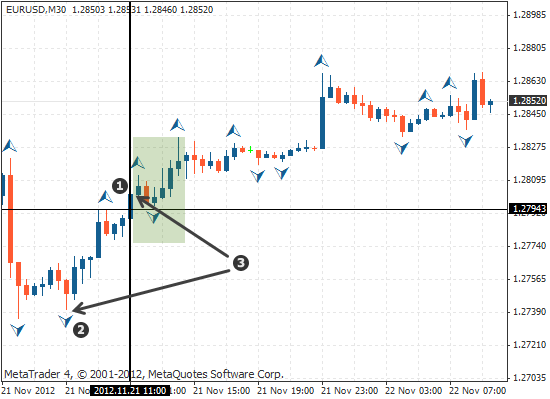 Break of an up fractal

Most recent down fractal where the stop loss would been placed if the trade was taken on the 30 minute chart. 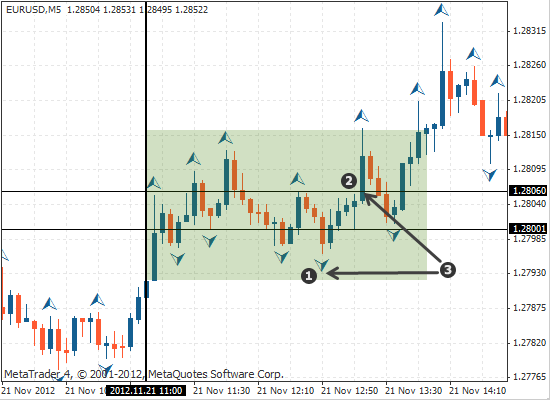 You have reduced the risk of the entry on the lower time frame, however you are trading in the direction of the over all market trend and so you have combined the benefits that both time frames offer.