The 5 Steps of the Forex Beginner Strategy

You should now know the key terms you need to start learning the beginner strategy. The first step is determining the overall market direction, which is the base for making the rest of your trading decisions. 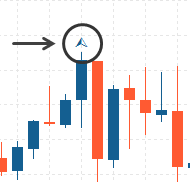 You will use fractals throughout the beginner strategy, however it is very important to know that you should wait for two candles to close on the right side of the fractal to confirm that the fractal is valid. Until this has happened, completely ignore the fractal.

A broken fractal is an indication of market direction 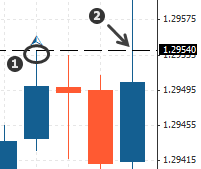 Note: it is the immediate break of the high or low price of the candle at the fractal, not the fractal itself, that gives the indication.

In the image to the right, you can see that it is the high price below the fractal at 1 that is broken by the candle to the right at 2.

Note: it does not matter where the actual fractal that is broken is located, what counts is the location of the point where it breaks. It is important to understand that it is the last break of a fractal that counts to determine the market direction, and not the fractal itself. Take a look at the following chart: 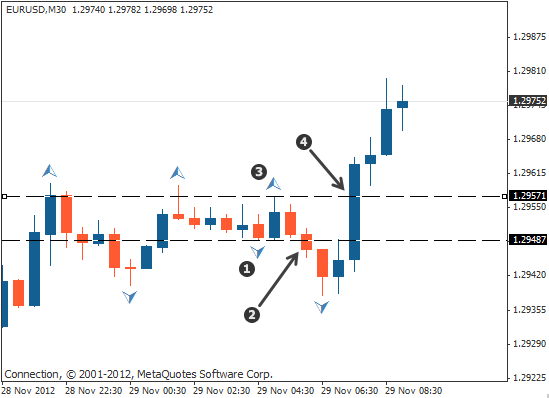 You can break this down more easily into the following steps:

Whichever fractal broke last will be the market direction. So if the last break point was of an up fractal then the direction is up and vice versa.