Introduction of the Yuan and its history

Introduction of the Yuan and its history

At this point we want to explain the characteristics of the Yuan and of the Renminbi respectively. First of all Yuan and Renminbi are synonyms. China’s currency is officially called the Renminbi. The Yuan is the basic unit of the Renminbi. In terms of the financial market, the ticker symbol for the Yuan Renminbi is CNY.

In terms of worldwide foreign exchange sales, the Yuan has a long way from becoming a top currency. In 2016 it took the 8th place in the global currency ranking and its share of total sales was just 4%. This brings up a very important fact: With just 4% in currency sales, China has an 18.3% of worldwide GDP (Gross Domestic Product). Comparing the significance of the Yuan as a global currency with the size of the Chinese economy, reveals a strong underrepresentation of the Yuan.

The History of USDCNY with different systems

First, let’s have a look at the following long-term chart: 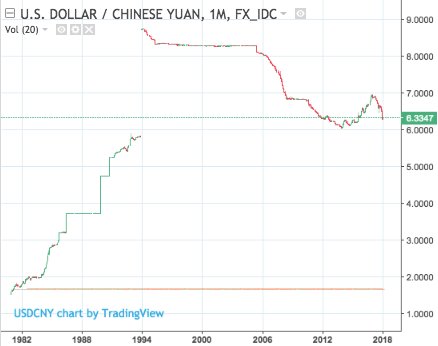 What you see here is the last 37 years. Maybe this is not the first time you see such a chart, you are perhaps wondering about the weird course. This is due to the monetary policy of the People’s Bank of China (PBC or PBoC the Central Bank of China).

Let's see the exchange rate systems between the two currencies. Between 1994 and 2010 the Yuan was tied to the USD and the exact binding was determined by the PBC. From 2010 and onwards the exchange rate regime became more flexible and the fixed bond to the USD was replaced by a basket of currencies. DIf we consider all of the above aspects, it is hard to define Yuan as a free floating currency. The PBC continued to have a tight grip of the USDCNY exchange rate, although the Yuan could fluctuate freely within a certain range.

The appreciation of the Chinese currency has long been demanded by Europe and the US, China's economic boom and strong export growth were favored by the country's low-rated currency. The US,in particular, has been pushing for a Yuan appreciation in view of its high trade deficit with China.

On August 11, 2015, the PBC surprisingly depreciated the Yuan by 1.9%, which was followed by another devaluation of 1.6% on the following day. The PBC was aiming to approximate market mechanisms and adapt to the expectations of currency traders.

On November 30, 2015, the International Monetary Fund (IMF) declared the Yuan as the fifth global reserve currency alongside the US Dollar, Euro, British Pound and Yen. From that moment and onwards Yuan could be used more frequently in the global trade and in financial systems. On October 1, 2016, the Yuan was added to the IMF's world currency basket as the fifth currency.

However, to this day, it is difficult to say that the Yuan is free floating.

This is why it's so hard to use the Yuan in short-term trading. But there are also long-term opportunities, as economic developments and monetary policy play a very important role.