The Bollinger bands indicator is an oscillating indicator and is used to measure how volatile a market is.

They help you identify whether a price is relatively high or low compared to its recent average and predict when it might rise or fall back to that level. This will help you decide when to buy or sell an asset.

Bollinger bands are comprised of three main bands or lines.

The central band shows the price's simple moving average. The upper and lower bands represent levels where the price is considered relatively high or low compared to its recent moving average.

The image below shows what Bollinger bands look like on a price chart: 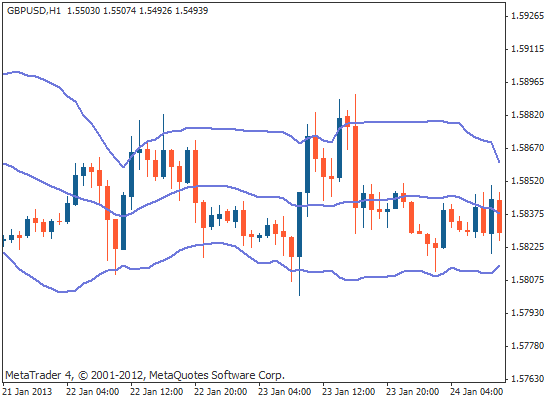 Most of the price action is generally contained within the bands and this means they can be used to predict market reversals.

When the price reaches the upper band, the asset is trading at a relatively high price and is considered overbought. You could now look to sell the asset on the expectation that its price will fall back towards the central moving average band.

When a price approaches the lower band, the asset is trading at a relatively low price and is considered oversold. You could now look to buy the asset on the expectation that the price will go back towards the central moving average band.

Be cautious, however – just because the price may reach the upper and lower bands does not mean that the price will reverse. You will need further confirmation — using, for example, candlestick patterns or another indicator – that the price is reversing before you enter into a trade.

The distance between the bands 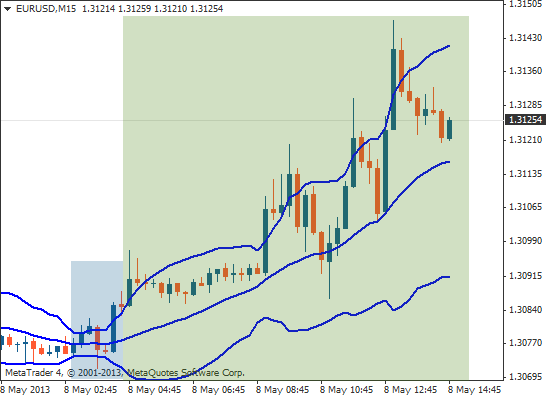 There are two different settings that you can change on the Bollinger bands indicator: the number of periods and the standard deviation.

The standard setting for the Bollinger bands is 20 periods (or 20 candles). This refers to the length of time over which the indicator is calculated from the price action.

In the chart below, the indicator has a setting of 10, you can see the price breaking the upper and lower bands more often: 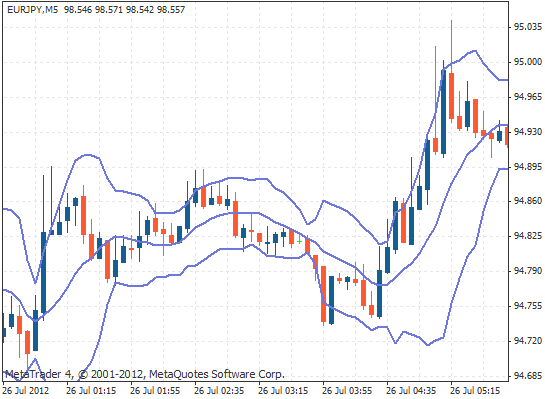 Setting a higher number of periods will make it less reactive and result in a smoother lines.

The following image shows a setting of 40 – double the standard setting of 20 periods. Notice how far apart the outer bands are compared to the previous chart and how less often the price breaks the bands: 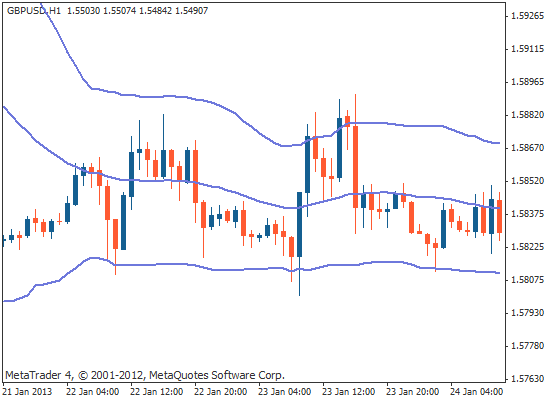 The standard deviation setting of the Bollinger bands is 2.

The standard deviation refers to how much of the data from the moving average's normal distribution pattern are included in the bands.

Increasing the standard deviation increases the distance of the bands from the central line and so more of the price action is contained within them.

The settings appear in the top left-hand corner of the chart, and would generally show as '20, 2' under the default settings.

Decreasing and increasing the standard deviation

Take a look at the following charts where the standard deviation has been adjusted to 1.9: 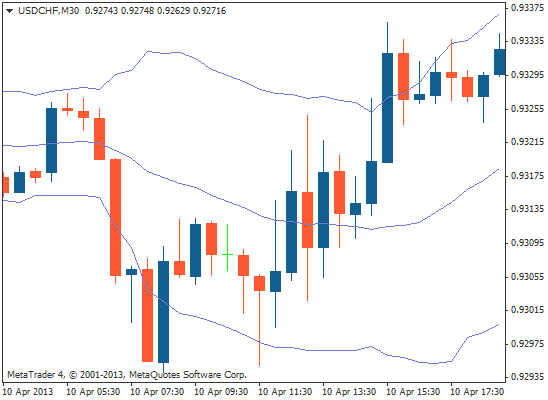 You can see that the upper and lower bands are now close together and the price breaks the bands more often, as opposed to when you increase the standard deviation to, say, 2.1 in the following chart: 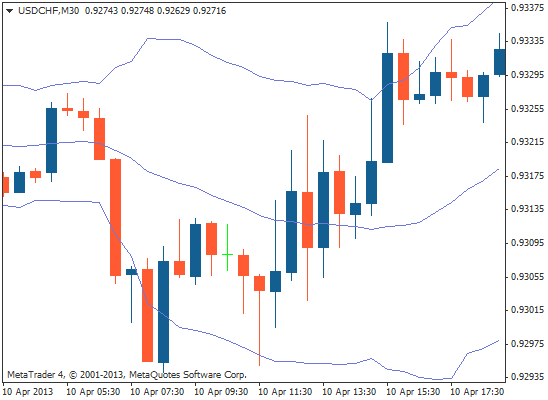 You can see in the following chart a more extreme example where the Bollinger bands standard deviation settings have been set to 2.5 and the price breaks the bands less often: 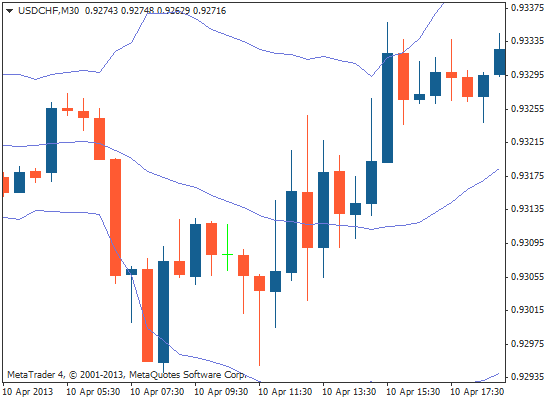 By increasing the standard deviation of the Bollinger bands, you are effectively altering the levels of extremes that the price has to go in order to break through them.

Because the price will break through the Bollinger bands with a higher standard deviation less often, these higher settings potentially give you more reliable signals.

In this lesson, you have learned that …