Welcome to Tradimo! Here is our special offer for new users: Buy your first course now and get 10% off!

How to trade with Fibonacci levels

How to trade with Fibonacci levels

The Fibonacci tool is applied to a price move

The actual calculations of the Fibonacci levels are based on the numbers in the Fibonacci sequence, or rather the percentage difference between them. However, for this lesson we will simply show you how to use this tool rather than explaining the mathematics behind it.

Fibonacci levels are retracement and extension levels that work as support and resistance on your price chart.

Start from the beginning of the price move to the end

The Fibonacci tool is applied manually. When measuring a downtrend, you apply the tool at the start of the move to the end – it is always applied from left to right. The chart below demonstrates this: 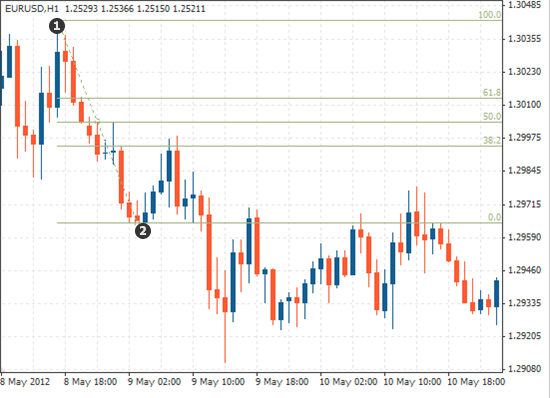 For an upward move, the tool is applied from the bottom and ending at the top – again it is always applied from left to right. The following demonstrates this on a chart: 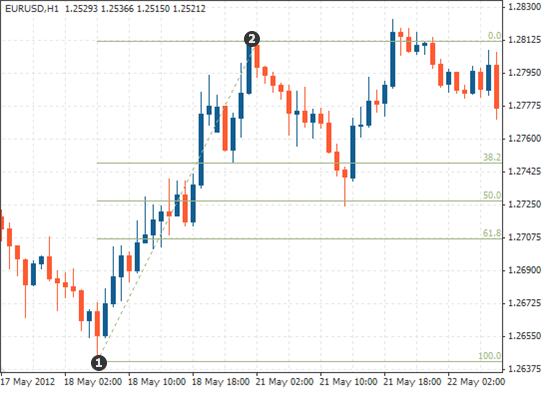 As you can see in the charts above, after the Fibonacci tool has been applied, it automatically places the Fibonacci levels between the start and the end of the move. These levels are referred to as retracement levels.

Fibonacci levels are shown as percentages of that total move. So the level that has been placed half way between the start and the end of the move is the 50% retracement level. So if the price then retraced halfway back, it is said to have retraced to the 50% level. This then acts as support or resistance, depending on which way the trend is.

The retracement levels therefore tell us how far the pull back could be.

In the chart below you can see the 38.2%, 50% and 61.8% levels. These are commonly used levels that the price could retrace back to, although there are other retracement levels that have been identified and work well. 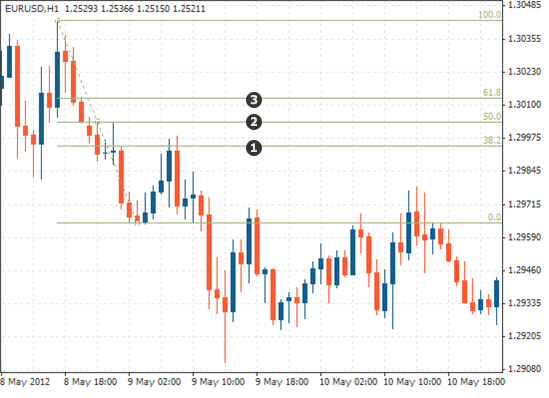 Fibonacci retracement levels can be used for entries

As you can see from the chart below, the Fibonacci tool was applied to an uptrend and the 38.2%, 50% and 61.8% levels was placed in between the start and the end of the move. As these are levels that the price could retrace back to, you can then use them for potential entries. 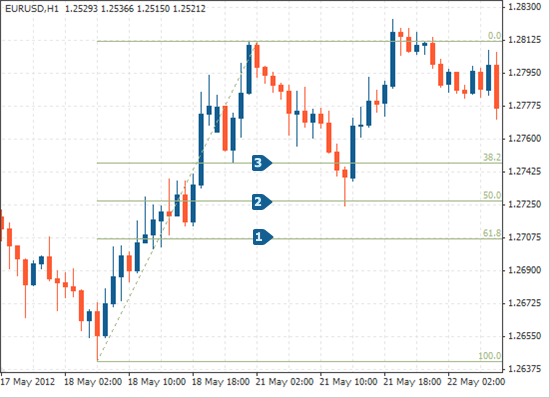 How to choose the correct level to enter

There are two ways to choose which retracement levels you use to enter into the markets:

1. Aggressively enter as the price reaches each level.

You could enter at each retracement level placing a stop loss on the other side of the Fibonacci level. If your stop loss is hit, you simply enter again at the next level and carry on until the price goes back in your favour. This is an aggressive way of finding entries using the Fibonacci tool.

2. Wait until the price finds support or resistance at these levels first, and then enter.

You wait until the price finds support or resistance at these levels, wait for the price to move back in the original direction of the trend and then enter.

The Fibonacci tool is not only used to establish the retracement levels for traders as support or resistance; it can also project extension levels that show where the price could go to. Fibonacci extensions can therefore be used for profit taking or even counter trend entries. 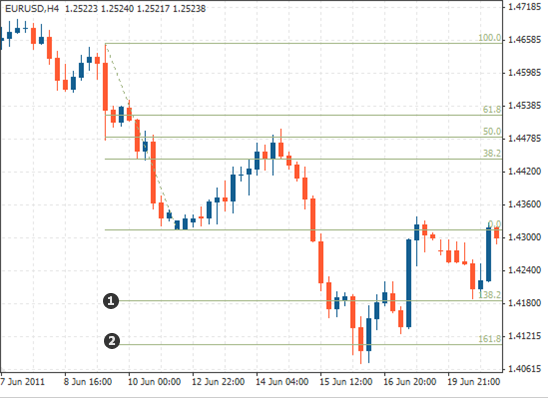 The Fibonacci tool can be used to enter a position at one of the retracement levels when the price pulls back and then exit at one of the extension levels.

Below is a chart showing the extension levels of the Fibonacci tool applied to an uptrend. You can see the retracement and extensions levels. 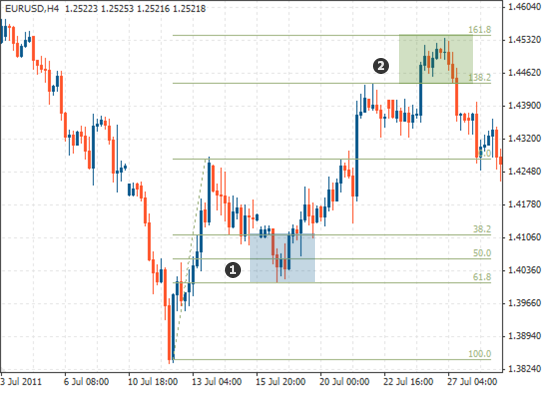 How to choose the extension level at which to take profit 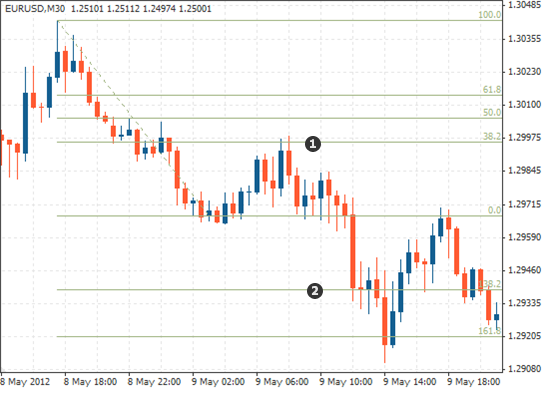 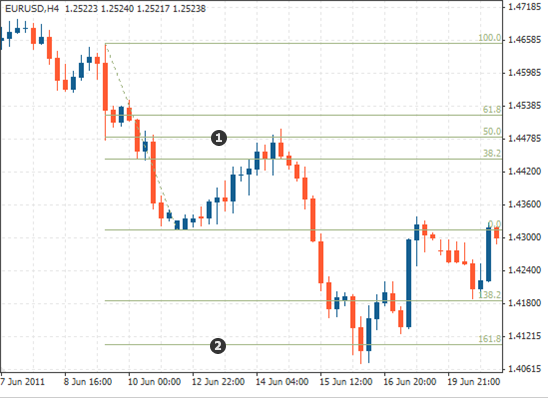 The first question you may ask is “why do Fibonacci retracement and extension levels correspond with each other?”. The answer comes back to a self-fulfilling prophecy. Banks and large financial institutions will look to take their profit at some point and targeting a Fibonacci extension level is one method they use. They will be expecting other banks and traders to exit at these levels and so based on these expectations, they do the same – hence a self-fulfilling prophecy.

However, it is important to note that this is not a fixed rule; for extension levels to work, they must be in a confirmed trend and this does not happen every time.

Using each level as a target

An easier method of using the extension levels is simply to exit when the price seems to find significant support or resistance there. In other words, if the price seems to have trouble breaking through a Fibonacci level, then this can be deemed a good exit.

Get a deeper insight into the world of trading and see trade ideas that we implement on our real money account. Try our Premium service for just $1 for the first month with no further obligations.  Go Premium  now and use a  tradimo1 voucher code at a checkout page.

An Intraday Strategy Based on a Currency Strength Meter

The currency strength meter at LiveCharts.co.uk gives you a quick visual guide to which currencies are currently strong, and which ones are weak. The

Scalping involves spending very little time in trades, resulting in small and frequent profit taking. Thus, it presents a very attractive way of trading. Taking the time to learn how to scalp properly will enable you to achieve consistent profits with this method.

The trend hunter strategy is a faster pace strategy than a dialy strategy and is a great strategy if you are looking for a mechanical way to enter the market.

Learn how to use the most popular forex, CFD trading platform, MT4. Find out how to set up your charts, add indicators and place or manage your trades in MT4.

The Price, Context and Market structure Course was put together with the aim of providing actionable knowledge to market participants by discussing key structural notions relating to markets in general and the framework needed to read price and articulating trades.

Enrol into this course now to save your progress, test your knowledge and get uninterrupted, full access.