Welcome to Tradimo! Here is our special offer for new users: Buy your first course now and get 10% off!

Fractals are indicators on candlestick charts that identify reversal points in the market. Traders often use fractals to get an idea about the direction in which the price will develop. A fractal will form when a particular price pattern happens on a chart.

Fractals are indicators on candlestick charts that identify reversal points in the market.

Formation of an up fractal 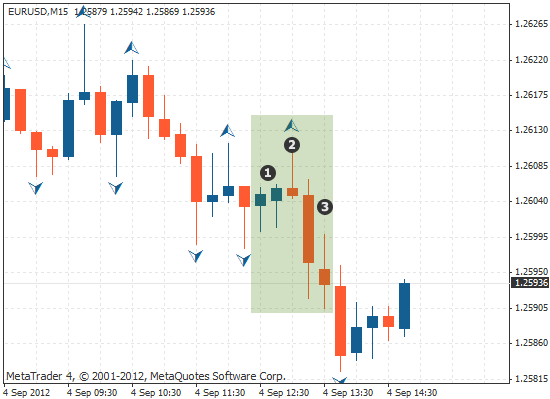 Formation of a down fractal 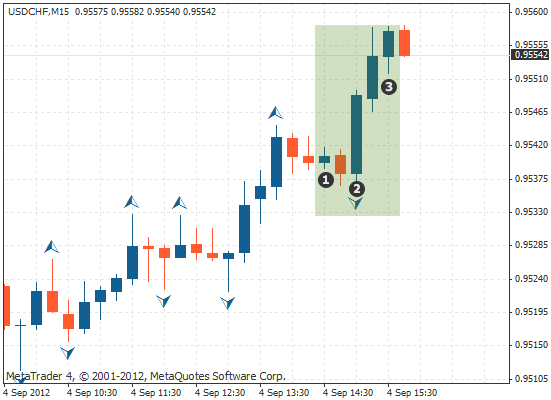 The fifth candle must close

Since a fractal is a five-candle pattern, the fifth candle in the set must close and complete before any trading decisions can be based on that particular fractal.

The fifth candle in a fractal candlestick pattern must close before you make trading decisions.

This is because the price can move during the time that the fifth candle is forming. If price moves either above the higher high or below the lower low, while the pattern is still forming, the fractal indicator will disappear from your price chart. So you must wait for the pattern to complete in order to make sure that the fractal is confirmed.

Fractal indicators can be used to determine the market direction

Traders can use fractal indicators to determine the possible direction of price in a market.

The image below demonstrates how this appears on a chart when the price has broken the most recent down fractal. 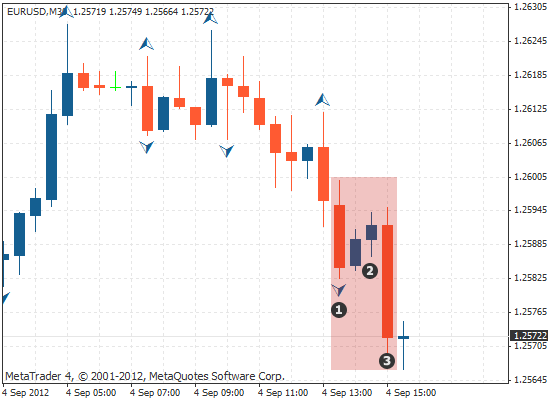 As you can see in the chart above, the last fractal to be broken was a down fractal. This suggests the market is bearish, meaning traders should be looking for selling opportunities.
The next example shows when the price has broken an up fractal: 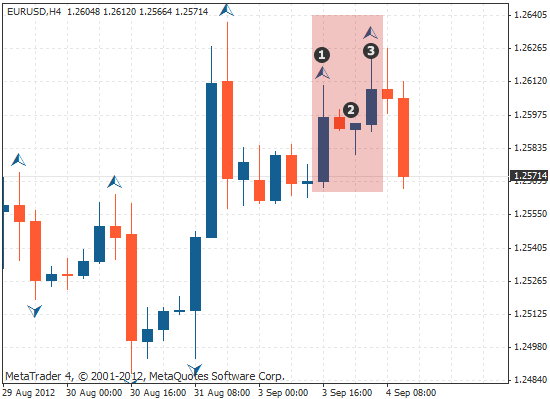 The chart above demonstrates that the most recent up fractal was broken. This suggests the market is bullish, meaning traders should be looking for buying opportunities.
Fractals tend to be more reliable indicators of direction when used with longer time frames than with shorter time frames.

Traders also often use fractals to decide where to place stop loss orders.

For example, when entering a short position you can use the most recent up fractal to place your stop loss.
Traders usually use the tip of the actual fractals indicator for this, rather than the candle itself, as shown on the chart below: 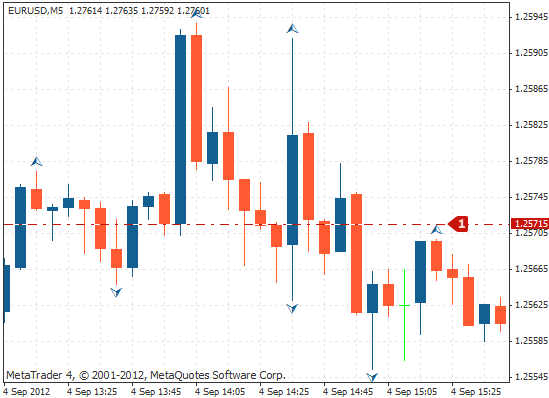 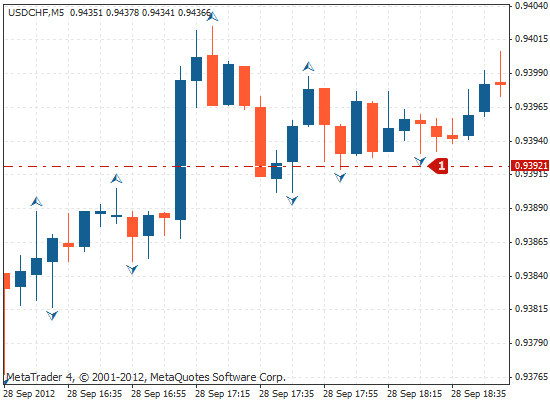 You can see how it is the most recent down fractal that is used to place the stop loss.

Get a deeper insight into the world of trading and see trade ideas that we implement on our real money account. Try our Premium service for just $1 for the first month with no further obligations.  Go Premium  now and use a  tradimo1 voucher code at a checkout page.

An Intraday Strategy Based on a Currency Strength Meter

The currency strength meter at LiveCharts.co.uk gives you a quick visual guide to which currencies are currently strong, and which ones are weak. The

Scalping involves spending very little time in trades, resulting in small and frequent profit taking. Thus, it presents a very attractive way of trading. Taking the time to learn how to scalp properly will enable you to achieve consistent profits with this method.

The trend hunter strategy is a faster pace strategy than a dialy strategy and is a great strategy if you are looking for a mechanical way to enter the market.

Learn how to use the most popular forex, CFD trading platform, MT4. Find out how to set up your charts, add indicators and place or manage your trades in MT4.

The Price, Context and Market structure Course was put together with the aim of providing actionable knowledge to market participants by discussing key structural notions relating to markets in general and the framework needed to read price and articulating trades.

Enrol into this course now to save your progress, test your knowledge and get uninterrupted, full access.